Ladies and Gentlemen, Lets get ready to rumble!!! The time has come for the epic online battle between social influence platforms, Reigning champ Klout and rookie contender Kred.

Klout and Kred are programs that determine and compare an individuals online influence. Calculated on data collected from social networking sites, such as Twitter, Facebook, Google+, etc. and offers a score that can be measured against other individuals.

Speaking with Natalie Brandweiner who’s experienced both Klout and Kred she said, “It’s interesting that Kred is adopting a Pinterest-style visual display with Kred Story rather than providing a raw score. Based on the growing popularity of the social network it seems a smart move, likely to keep users engaged and returning to the site. As social media expert Mark Scahefer explains, it’s also separating itself from Klout’s big business approach of partnering with huge brands to provide ‘perks’ and becoming the influencer marketing tool of small firms.”

“However, whilst both tools can provide a basic indication of influence, neither are sophisticated enough yet to be used in isolation.”

Like her, many are comparing and beginning to isolate the differences between the two platforms and deciding which works better to fit their needs

Well-known marketing consultant Tara Coomans wrote an article sharing her evolution with Klout and her inicial thoughts on Kred. When asked how she felt on this newcomer she said the following “One of the more interesting aspects of Kred is the attempt to integrate off-line influence. While its in the early stages, the blending of off-line and on-line influence provides a more well-rounded view of potential authority on a particular subject. I also appreciate the transparency in their score calculation. But regardless of what platform is used to measure, having influence today doesn’t guarantee influence tomorrow. Influence measurement isn’t likely to go away, but all are in the developmental stages and should be taken within that context.” 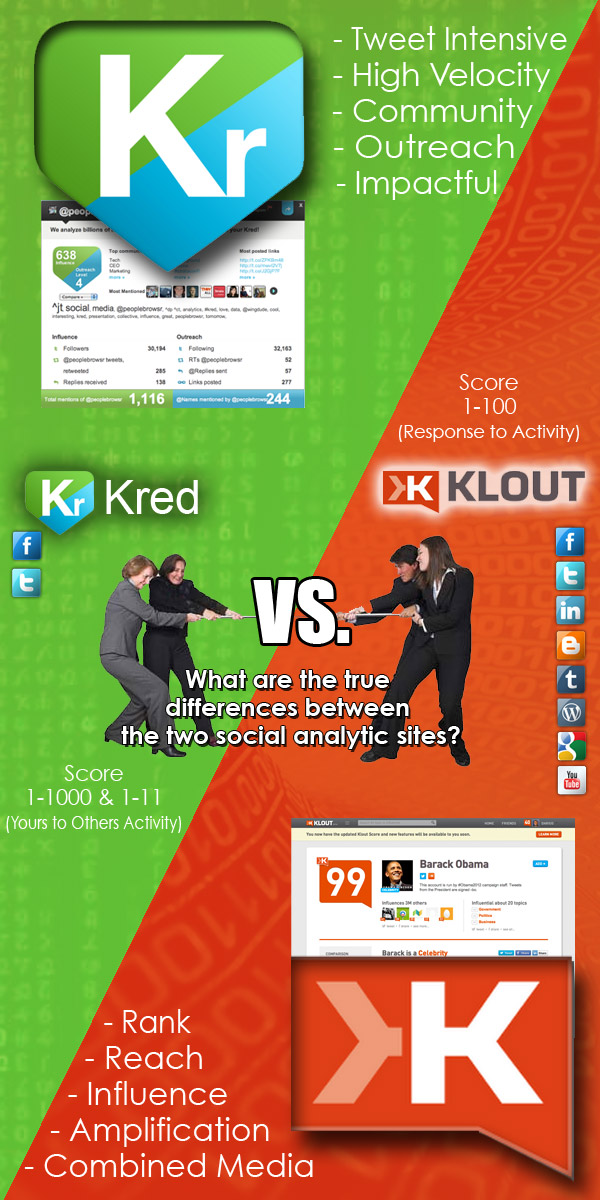 Many may argue the accuracy, legitimacy and importance of quantitative analysis of social influence, but if experience has tough us anything, it’s that competition benefits us all. Klout will have to up their game to keep their status while Kred will have to show us something that will makes us say WOW!

In the fierce battle of social influence measurement, which platform will reign supreme: Kred or Klout?